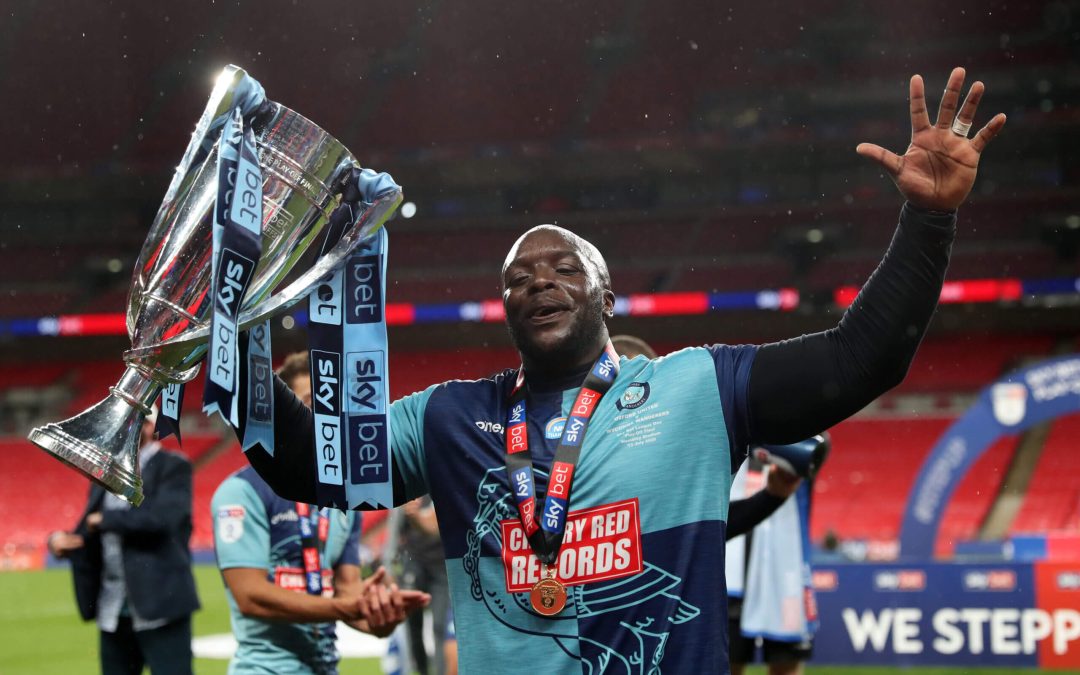 Adebayo Akinfenwa is just a day away from what he calls his “last dance” at Wembley after 22 years, 14 clubs, 233 goals and 792 appearances in the professional game.

Tomorrow’s League One play-off final against Sunderland will be the 40-year-old’s final match if he is called upon from the bench for Wycombe Wanderers.

Luckily for him, Akinfenwa is more than just a footballer. With 1.4 million Instagram followers, a successful “Beast Mode On” clothing range and multiple sponsorship deals, Akinfenwa feels he is ready to hang his boots up for good.

The larger than life character, who is also known as “The Beast”, has accomplished his dream of being paid to play football but he is now hoping for a fairytale ending.

He has spent the past few days dreaming of coming off the bench to score the winner in front of a packed Wembley to send Wycombe, whom he joined on an initial one-year deal in July 2016, back to the Championship at the first time of asking.

Not many footballers get the chance to end their career in a final at England’s national stadium but the lower-league cult hero has just that.

“To have my last dance there, whether it is two minutes, 10 minutes, 15 minutes — I couldn’t have written it any better myself,” Akinfenwa tells The Athletic just days before his last hurrah.

“I am looking forward to it but I am trying to put the sentimental side of it to one side. I want to win the game for my team. I will play my part but to know that my final game as a professional will be at Wembley is exciting.

“I would take not getting on and winning but if I am writing the script then we win and I score the winner. It will be a really good way to say goodbye.”

There is a glint in Akinfenwa’s eye when he speaks about his impending retirement. You can tell he will not miss the routine of training and recovery when he calls it a day this week.

He has even already promised to video call his Wycombe team-mates on Boxing Day to rub in the fact they have had to play in the cold over the festive period while he is on holiday in Africa.

“I am looking forward to another challenge, another excitement. It’s all I’ve known for 22 years. In any industry, especially football, you become institutionalised.

“We are in a bubble; we are told where to go, what to wear, how to think. Then you come into the real world where you start again. It’s an exciting challenge and I am looking forward to it.”

Akinfenwa does not shirk challenges. After coming through the youth system at Watford, the London-born striker headed to Lithuanian side FK Atlantas in 2001 as he sought his first professional contract. He moved to a country he had never even heard of to test himself in the UEFA Cup.

In Lithuania, Akinfenwa received death threats and racial abuse from the terraces — including from his own supporters — because of the colour of his skin. He believes that experience made him the resilient character he is today and gave him the platform to shine in the lower leagues of English football.

“We are products of our environments and experiences. Lithuania made me grow up. It made me hardened. It made me realise you can’t control other people’s perceptions and once you really become comfortable with who you are then you are good.

“Why would I let people I wouldn’t take advice from negatively penetrate my soul? They were talking about wanting to kill me because of the colour of my skin. Then I came here and people were saying I was fat. I was like, ‘That didn’t affect me so why should that affect me?’. I came to a point where I became comfortable with who I am and then manoeuvred forward.

“Sometimes you can’t always do that because we are human beings. We lash out and sometimes our emotions get the better of us. I know I am far from perfect and I’ve let people know but at the same time, I will talk my truths. I think that’s all we can do in this world. Talk your truths and then you are good.”

After spending two years in Lithuania, Akinfenwa moved to the Welsh Premier League with Barry Town. Boston United then brought him back to England and Akinfenwa has since spent all but one season in either the third or fourth tiers of the EFL with clubs such as Swansea City, Millwall, Northampton Town and AFC Wimbledon.

His only campaign in the second tier came last season with Wycombe. Akinfenwa was largely consigned to a bench role, with 22 of his 33 league appearances coming as a substitute as Gareth Ainsworth’s side finished just a point from safety.

Say the name “Gareth Ainsworth” to Akinfenwa and a beaming smile automatically follows.

There is also no hesitation when he is asked who his favourite manager to play under is.

“There are no two ways about it, Gareth Ainsworth. I have had no connection like that with any other manager. He unapologetically allows you to be who you are. We mirror each other because I have never been a typical footballer. I have never been built like one and I don’t think he’s a typical manager.

“Some people think it’s some kind of euphoria but he is very strongly opinionated on what he wants to do. I am also very strongly opinionated but he is the manager. He picks the team. My faith is eternal and I believe God connects those who are meant to go into people’s lives. We were meant to work with each other — our birthdays are even the same day.

“I think he gets overlooked because he’s different. I also think my footballing ability gets overlooked because of the way I am as a person and the way I look. For me, I’m cool, you have to be more than a big guy to play the game for 22 years. I am comfortable with that but I am seeing the same thing happening to him. Regardless of how he dresses or speaks, look what he is doing. The proof is in the pudding.”

Despite such a ringing endorsement, even Ainsworth couldn’t tempt Akinfenwa into a coaching role or another season as a player. Instead, he will act as a mentor to wannabe footballers and take up opportunities within the media.

When asked if he would work as Ainsworth’s assistant, Akinfenwa joked: “He knows I wouldn’t turn up. I’ve got a thing for being late all the time. I just have no desire to go into a coaching role so I don’t think that’s for me.

“I am very big on the mental aspect and education — having somebody to talk to and somebody to reassure individuals. I would want to have conversations with the next generation.

“Being you is the most powerful facet you have got. In society, people really like to talk about what you can’t do. For me, that’s a problem for the new generation. People want to talk about what they can’t do and not big up their strengths. That’s where I would want to go in and say you are fine as you are. We all need to make tweaks to be the best versions of ourselves.

“The coaching, bellowing orders, that’s not me. I will do the media stuff. One thing I have always said is I have had a profession for 22 years, I don’t want another profession. I want to try my hand at a lot of different things. Whatever I enjoy, I will do. Whatever I don’t, I won’t. I am all right as long as I am earning enough to take care of my five children.”

Akinfenwa thought he was going to have to finalise his retirement plans four years ago because of a recurring knee injury. However, after enlisting the help of Dr Bunmi Aboaba, a leading food addiction coach, in 2019, Akinfenwa quickly realised his diet had to change.

He cut back the unhealthy daily consumption of six energy drinks to extend his career. Diet has been one of the biggest changes in professional football during his 22 years within the game.

“You will see players taking a lot more care of themselves. Cutting down on sugary drinks helped me lose some weight, which made sure there was less impact on my knee and prolonged my career. I will always say now that I am an advocate for education and I will thank Bunmi for that.

“Different things work for different body types. They say they can’t teach an old dog new tricks, but you can.”

So now it all comes down to this Saturday. Akinfenwa’s last two Wembley appearances have ended in victory.

He scored a penalty in stoppage time for AFC Wimbledon in their 2-0 League Two play-off final win over Plymouth Argyle in 2016 and also came off the bench in Wycombe’s 2-1 League One play-off final victory against Oxford United in 2020.

The latter was played behind closed doors because of the coronavirus pandemic but the avid Liverpool supporter, who has been labelled “a legend of English football” by Pep Guardiola, did receive a congratulatory video message from Jurgen Klopp to make up for the void.

Time will tell if Wycombe’s all-time leading EFL scorer adds another play-off victory to his CV.

“If you accomplish your dreams then that has to be the best moment of your career and everything else from there are sub-bonuses and sub-headings. The accolades I have got, the goals I have scored, the people I have met and the trophies I have won are all sub-headings to wanting to be a professional footballer as a kid.

“Becoming a professional footballer was the best moment and the rest have just been beautiful moments. And now the last dance at Wembley, it can’t get any better.”